Landing this month in Lightspeed Magazine’s August 2020 issue is a new reprint of The Shadow Prison Experiment, written by Caroline M. Yoachim and appearing with a podcast, narrated by yours truly. I really love Yoachim’s writing and had so much fun narrating this exciting work of dystopian fiction.

The Shadow Prison Experiment explores the concept of a society where people wear skin overlays of generic default… which is kind of like a cross between a nondescript human and a silver android! The people here are either citizens, shadowkeepers or shadow prisoners. A shadow prisoner is someone who has undermined the system in some way and is therefore cast into Shade. Shades don’t go to an actual prison for their supposed crimes, instead a shadow prisoner just gets filtered out…even from themselves. They can no longer see their own skin – their body now only appears before them as a featureless, smoky image. If that isn’t frightening enough, everyone and everything else has also been filtered out, even sound. The only people that the Shade can now see and hear, are the Shadowkeepers, who keep them in line.

The Shadow Prison Experiment,  follows Vivian, a mom to sixteen year old Cass.  When Cass is at risk of being arrested for attending a protest, Vivian steps in to protect Cass, and is instead, herself cast in to Shade.  Faced with a choice to accept her new reality or find a way to fight against it, Vivian plunges deep into Shade to find a way to end the Shadow Prison Experiment once and for all.

This story is part of a novelette called Shadow Prisons. The Shadow Prison Experiment was originally published on June 30, 2020 in The Dystopia Triptych, Vol. 1: Ignorance is Strength, edited by John Joseph Adams, Christie Yant, and Hugh Howey, and is now available on Audible and at Amazon. Do check it out! This is a really cool three part anthology. Dystopia Triptych, as well as the podcast at Lightspeed Magazine, are produced by the Grammy and Audie award winning team at Skyboat Media. 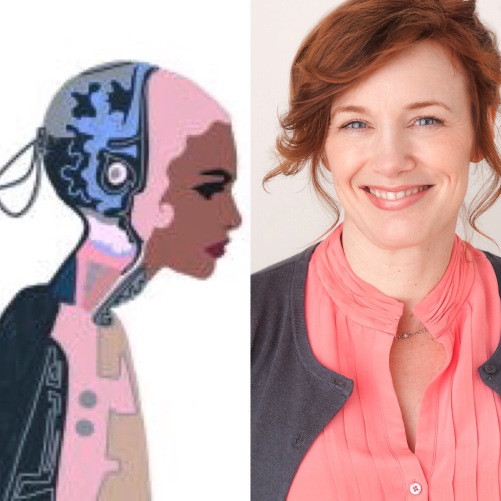 Landing today is a really cool Sci-fi story that I had so much fun narrating.  Melting Like Metal  is written by the talented Ada Hoffman, and sweeps us into the world where her novel, The Outside, takes place.

In Melting Like Metal, however, we are now in the POV of cyborg, Enga.  As an angel of the God called Nemesis, Enga is no longer human. That’s not to say, she still doesn’t have her own share of struggles. She most definitely does.  One of which, is she is not able to speak. For me as an narrator, this was an exciting challenge to play around with. Enga’s only way of communicating now, is by sending text messages from her heavily modified, technological brain.

This story takes off at warp speed and was truly awesome to work on.  If you’d like to check out the podcast, just head on over to Lightspeed Magazine. This podcast was produced by the amazing team at Skyboat Media, and was edited by John Joseph Adams and hosted by Jim Freud.