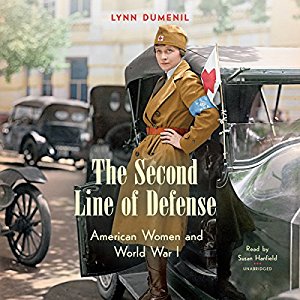 Lynn Dumenil’s The Second Line of Defense: American Women and World War I offers an in-depth look at the role women played during World War I and how they crossed personal, economic and political boundaries to help the United States mobilize for War. Published by Blackstone Audio, this was such a compelling book to narrate!

The women of this era fought fearlessly, volunteering on the home front, working as laborers in factories, serving as nurses overseas, and challenging racial divides at home – forming a true second line of defense. Anne Emerson, captured the essence of the early 20th century “new woman” beautifully in her 1918 Forum Article: “Today she is everywhere; a Salvation lassie, serving coffee and doughnuts on the firing line; in the Red Cross Emergency Hospital at the front; in the munitions factory at home; filling the gaps in man-made industry everywhere. . . She is omnipresent.”

Indeed she was.  It was an honor to narrate this book. I hope you enjoy it.